A grade II Listed building with a Renaissance-style frontage has become the latest award winning project to feature Proteus cladding.

Although Spanish City closed in 2002, it has remained a local beacon and so became the focal point of North Tyneside Council’s £36m seafront masterplan, undergoing a £10m restoration and regeneration to bring it back to its former glory.

As a listed building protected by English Heritage, it was essential that the redesign by ADP architects retained as many of the building’s original features as possible, including the copper Terpsichorean female figures or ‘dancing ladies’, which were restored and positioned on top of two redeveloped Cupolas.

Alongside this was the addition of a bold extension featuring Proteus SC perforated TECU Patina, which was applauded by the judges when ADP’s vision for Spanish city secured a RIBA North East Award 2019.

ADP Architects specified TECU Patina for Spanish City, a copper material that features the natural green patina from the outset, as it created a beautifully aged aesthetic that complements the ‘old’ copper finish of the dancing ladies.

The homogenous pattern featured on the Proteus SC perforated cladding covers the entirety of the new extension at Spanish City, making it difficult to discern the position of the different floors and giving the structure a monolithic presence that is able hold its own against the imposing dome on the original building.

Choosing round perforations or ‘holes’ was no accident, it creates a contrast with the right angles of the surrounding cityscape, but mirrors the internal layout. A defining feature of the building is its extremely complex geometry, in fact only four rooms have walls in a square format, every other space is curved or a polygon, including the impressive rotunda which the panels were designed to meet. 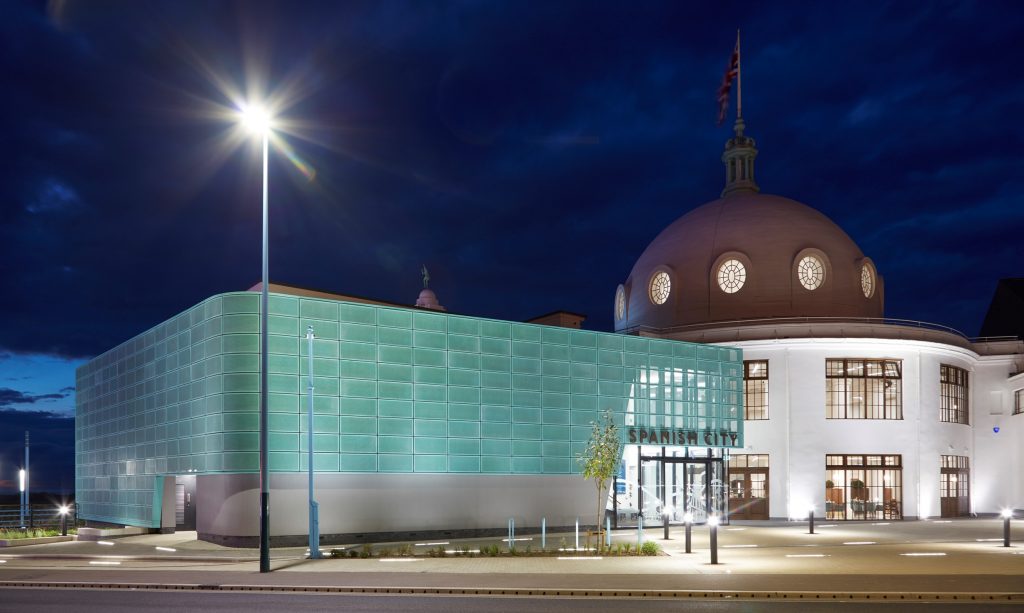 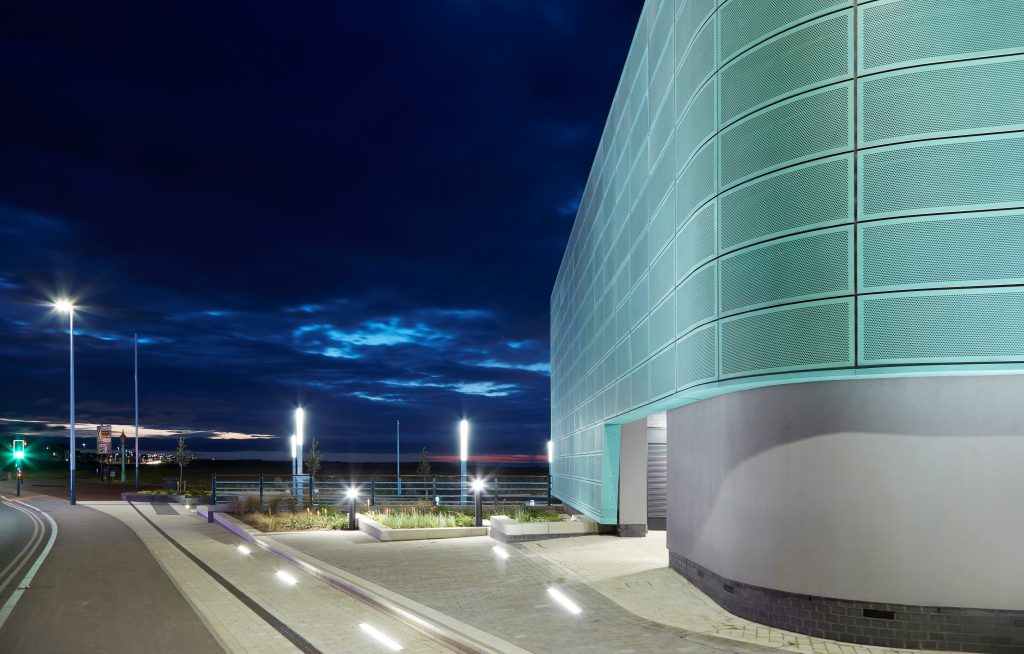 The Proteus SC TECU Patina perforated copper cladding panels were fixed over extensive glazed areas at Spanish City, so both sides were visible by people inside the building and from those outside. This presented an engineering challenge because the architects envisaged large perforated panels due to the sheer size of the façade (larger cladding panels on large facades can look more visually striking), which can require thicker gauge metal.

Working with ADP architects Proteus devised a rear supporting aluminium PPC framing system that was discrete and avoided having to increase the thickness – and cost – of the copper material. The outcome was that it enabled the panels to be designed to meet the maximum optimisation of material, whilst meeting the challenging geometry of the project.

As Spanish City occupies a spectacular seafront setting overlooking the North Sea coast, it is susceptible to harsh coastal climatic conditions, which include high winds and salty sea and air. The Proteus SC perforated cladding panels will go some way to protecting the building from the elements, which was a major factor in causing the wear and corrosion that saw the demise of the original structure. 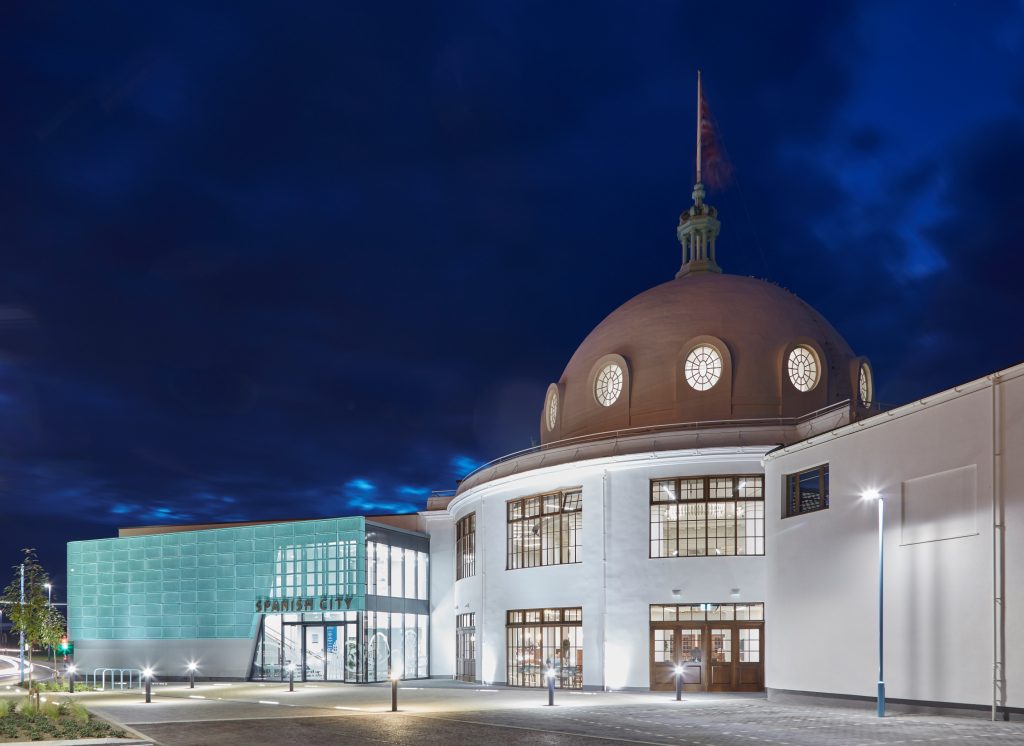 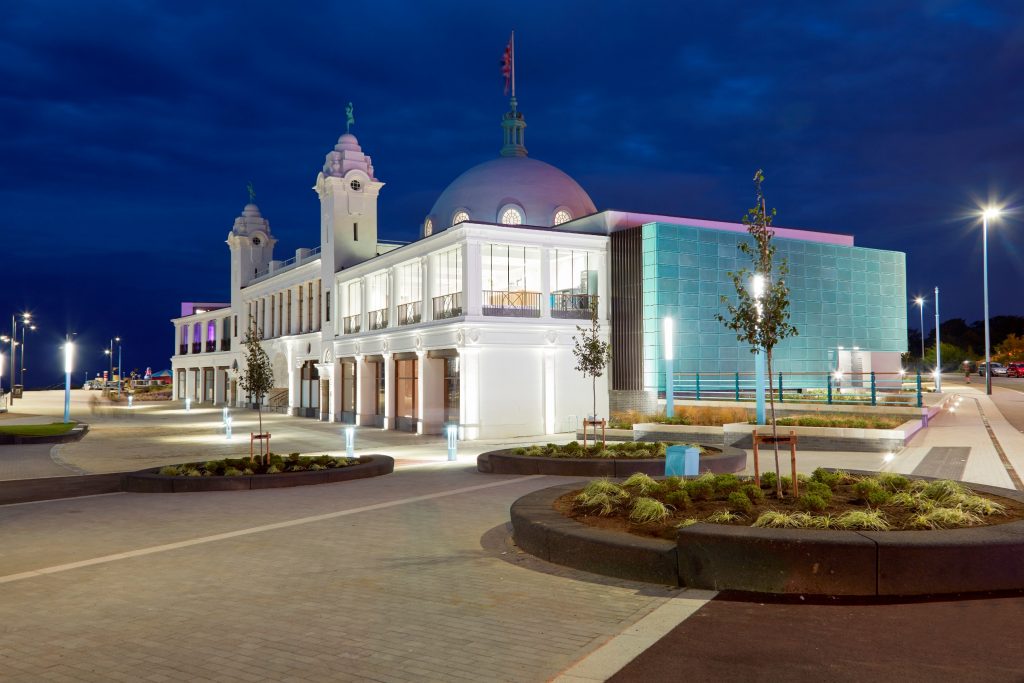 After more than two years of redevelopment work, by Robertson Group, the magnificent building is back to its former glory, transformed into an impressive mixed-use leisure venue that once again acts as a hub for tourists and members of the community.

The new extension block, clad by Chemplas Ltd, in Proteus SC perforated TECU Patina, to the rear of the building houses the new level-access entrance, toilets, plant and staircase that ensure compliance with modern standards.

Spanish City remains an iconic part of Whitley Bay’s heritage and a striking example of how old and new architectural styles and materials can work together. The building is now home to a Fish & Chip restaurant and takeaway, waffle and pancake house, Champagne bar, fine-dining restaurant, traditional tearooms and an event space.

Proteus Facades Ltd is able to offer a wide ranges of TECU copper and copper alloys in the UK. This includes TECU Copper, TECU Bronze, TECU Brass, TECU Gold, and TECU Zinn. Some of these materials are also available pre-patinated, which bypasses the gradual weathering process, so that the cladding panels take on the beautiful earth tones from the day the façade is installed.

Spanish City in Whitley Bay, is a collection of Edwardian seaside pleasure buildings and grounds. Built in 1910, the iconic structure, which once included a concert hall, restaurant, tea room, ballroom and funfair, attracted thousands of people from across the UK until it fell into disrepair in the 1970’s.

For more information on the range of inspirational TECU cladding materials from Proteus Facades, visit: www.proteusfacades.com

Sladen estates ‘top of the class’ for completing...