Businesses, traders and road transport companies operating in Greater Manchester are being asked for their views on proposals to tackle the urgent problem of roadside air pollution.

The ‘Greater Manchester Clean Air Plan to tackle nitrogen dioxide (NO2) exceedances’ (GM Clean Air Plan) proposes a package of measures to significantly reduce NO2 emissions from the most polluting road vehicles, which are linked to a range of serious health problems and reduced life expectancy. 1

Poor air quality is the largest environmental public health issue facing the UK, with air pollution estimated to contribute to the equivalent of 1,200 deaths in Greater Manchester each year2.

A seven-week clean air conversation runs until Sunday 30 June. More information is available at cleanairgm.com, where people can fill out a survey to give detailed feedback on the GM Clean Air Plan proposals, which include:

The proposed Clean Air Zone would be implemented from 2021 and would initially mean that buses, coaches, HGVs, taxis and private hire vehicles that do not meet emission standards would be required to pay a daily penalty to drive in Greater Manchester.

From 2023 the Clean Air Zone would also include non-compliant vans, minibuses, motorhomes and motorised horseboxes – when the availability of compliant vans on the market will make switching a viable option.

Deputy Mayor of Greater Manchester and business and economy lead, Sir Richard Leese, said: “Air pollution at the roadside is one of the biggest threats to our health in Greater Manchester. And, as a result, it affects how productive we are.

“We need to make sure that our Clean Air Plan proposals tackle air pollution from commercial road vehicles as quickly as possible to protect the health of us all – including the most vulnerable groups such as children, older people and those with existing health conditions.

“We recognise that our proposals could be challenging for many businesses across the region, in particular small businesses and sole traders – the backbone of our economy.

“That’s why we’re working with businesses of all types and sizes to understand how the proposals could affect them and to make sure that the right funding from government and support is available to help them switch to cleaner vehicles or retrofit their older, most polluting vehicles.

“As part of building a thriving and sustainable city-region, the environmental agenda also offers our businesses a huge opportunity to grow, and we’re committed to making Greater Manchester one of the greenest, healthiest and most attractive places in Europe in which to live, work and do business.

“This conversation is a real chance for those people and businesses who could be affected by the proposals – and anyone who cares about cleaning up the air we all breathe – to give their views and help us develop the right solutions for Greater Manchester.”

“Greater Manchester businesses need to let our local decision-makers know how the Clean Air Plan proposals would affect them.

“Business input will be crucial to make sure the detailed plan offers the right support for business, from sole traders to large companies.

“So I’d urge all businesses across our region to find out about the proposals and give their feedback on this very important issue.”

Once the conversation responses have been used to further develop the Greater Clean Air Plan, a statutory public consultation will take place on detailed proposals.

A final business case for the GM Clean Air Plan would be developed by the end of 2019, following public consultation, and subject to further local authority approvals. 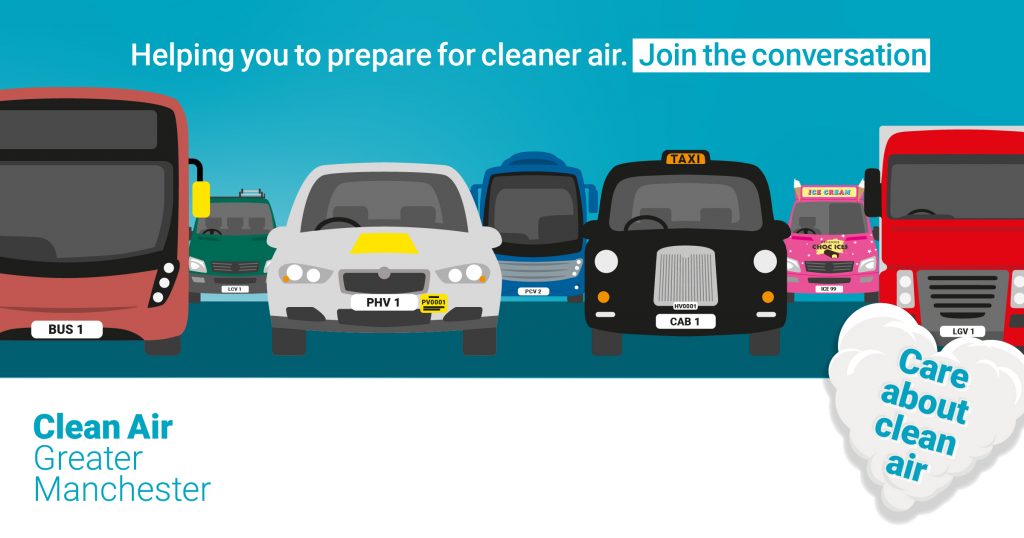 To find out more and take part in the survey, visit cleanairgm.com.