Nottingham City Homes (NCH) has reached a significant milestone – having now built over 500 affordable homes for local people across the city.

As well as being UK Landlord of the Year, NCH works closely with Nottingham City Council to build high quality, decent homes for Nottingham people and has delivered over 500 new affordbale homes to rent across  28 sites in Nottingham since 2014. NCH has taken on challenging sites, introduced new and innovative build techniques, and is building more homes with its own staff – delivering new local jobs as well as new  homes for Nottingham households.

531 properties have now been completed over the past four years, with 44 l currently under construction and a further 660 potential new builds on proposed sites. This is twice as many homes as any other Arms-Length Management Organisation – prompting Inside Housing magazine to name NCH the number one ALMO builder in the UK.

The homes have been built in neighbours across the city, including Sneinton, Bestwood, Aspley, Broxtowe, Clifton, Top Valley and Radford. The homes range from houses, and bungalows to independent living schemes and flats.

Over the last few years there have been some major developments, with over 270 homes being built on five sites alone. One of the biggest, the Lenton Green development, saw 142 homes created in Lenton, including 88 family homes, two commercial units and 54 Independent Living apartments.

Strelley Court in Strelley is the latest new development to open, with 37 new one-bed independent living apartments. Residents have been moving in to the new apartments over the last month.

Susan Walters-Peace is NCH’s official 500th resident in one of our newbuild homes and at the opening of Strelley Court she was presented with flowers by City Council Deputy Leader Cllr Graham Chapman and officially cut the ribbon to open the flats.

She said: “I feel honoured to be the 500th resident of an NCH-built home. The flowers were so unexpected and being able to cut the ribbon was a really nice touch to mark the occasion. 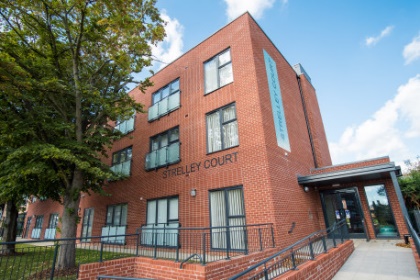 “Strelley Court is a really great place, my home is lovely and modern and the whole complex is a really high standard. All the residents love living her, plus we now know it’s a really special building for NCH being the 500th – that’s a badge we can wear with pride.”

Also completed in the middle of 2018 were 49 houses and six bungalows in The Meadows. The Meadows properties also have innovative sun tubes that bring up to 70% more natural light into the properties and help to combat fuel poverty.

One of NCH’s biggest builds is well underway. Construction teams have been at Winwood Heights in Sherwood since 2017.  The Winwood Heights project consists of the renovations of the existing Winchester Court and Woodthorpe Court high rise flats and the creation of 44 homes in an Extra Care Scheme named Winwood Court. 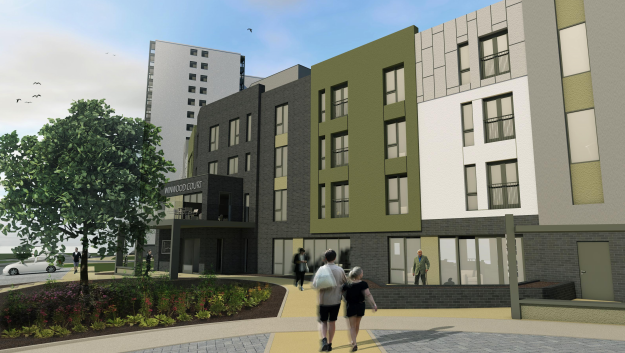 There are a number of sites already being looked at for potential new homes, including NCH’s first-ever properties wholly for private market rent. Plans to create 21 apartments on the site of the former Meadows Police Station have just been give the go ahead by planning and will act as a gateway to the Meadows and NG2 Business Park.

Plans for nearly 70 homes have also been submitted, or they have been granted permission by Nottingham City Council’s planning committee. Plans for homes on Marlestones in Bulwell and homes on Tunstall Drive in Basford have just recently been given the green light.

NCH is awaiting a decision on plans for homes on the former Clifton Miners Welfare site in The Meadows. Eighteen family homes will be built on Knights Close in Bulwell, with work due to start once a developer has been appointed. There are also plans in the pipeline for 287 homes at Poplar Heights in Bestwood and 65 eco homes at Eastglade in Bestwood.

Nick Murphy, Chief Executive of Nottingham City Homes, said: “The City Council has ambitious targets to deliver new homes for Nottingham people.  We are keen that  Nottingham City Homes  makes the biggest contribution possible to building decent homes which will transform peoples’ lives.  Our 500th new home is a milestone, but we need to build more to help the Nottingham families on our waiting list.

“But it’s not just about the numbers though. We are building good quality homes – which some have called  “the best new social housing in the country” – with high levels of energy efficiency, solar panels on all new homes and space standards which mean these are going to be good homes to live in for years to come.

“And of course, we place a premium on training and employing local labour – including setting up our own in-house new build team. We are offering more apprenticeships and more job opportunities for Nottingham people. Our new build programme is helping us to deliver our vision of creating homes and places where people want to live.”

Cllr Jon Collins, Leader of Nottingham City Council, said: “We have been working in partnership with Nottingham City Homes to transform our neighbourhoods and build energy-efficient, safe, quality new homes for Nottingham people.

“We’re developing a mix of properties across the whole city, from much-needed family accommodation to bungalows and independent living schemes which meet the needs of local people.

“Despite some difficult challenges the city faces in new house building, I’m proud of the city’s achievements and welcome the 500th resident as they move into their new home.”

Wandsworth Council Housing for All programme set to...

Council success bringing empty homes back into use

Godwin to bring much needed homes to Doncaster