Home improvement figures across Great Britain decreased throughout 2018 with the number of planning applications dropping by 2.8% compared with 2017.

The ‘Home Improvers of Great Britain 2019’ report, compiled by construction industry analysts Barbour ABI, shows that across Great Britain there were 2.8% fewer applications for home improvement in 2018 than in 2017. Despite a fall in applications, London held onto the top spot, even though it saw a reduction in the number of planning applications in 29 of its 32 boroughs, whilst the biggest growth in applications came from North West England, with an increase of 5.0% (see figure 1.1). 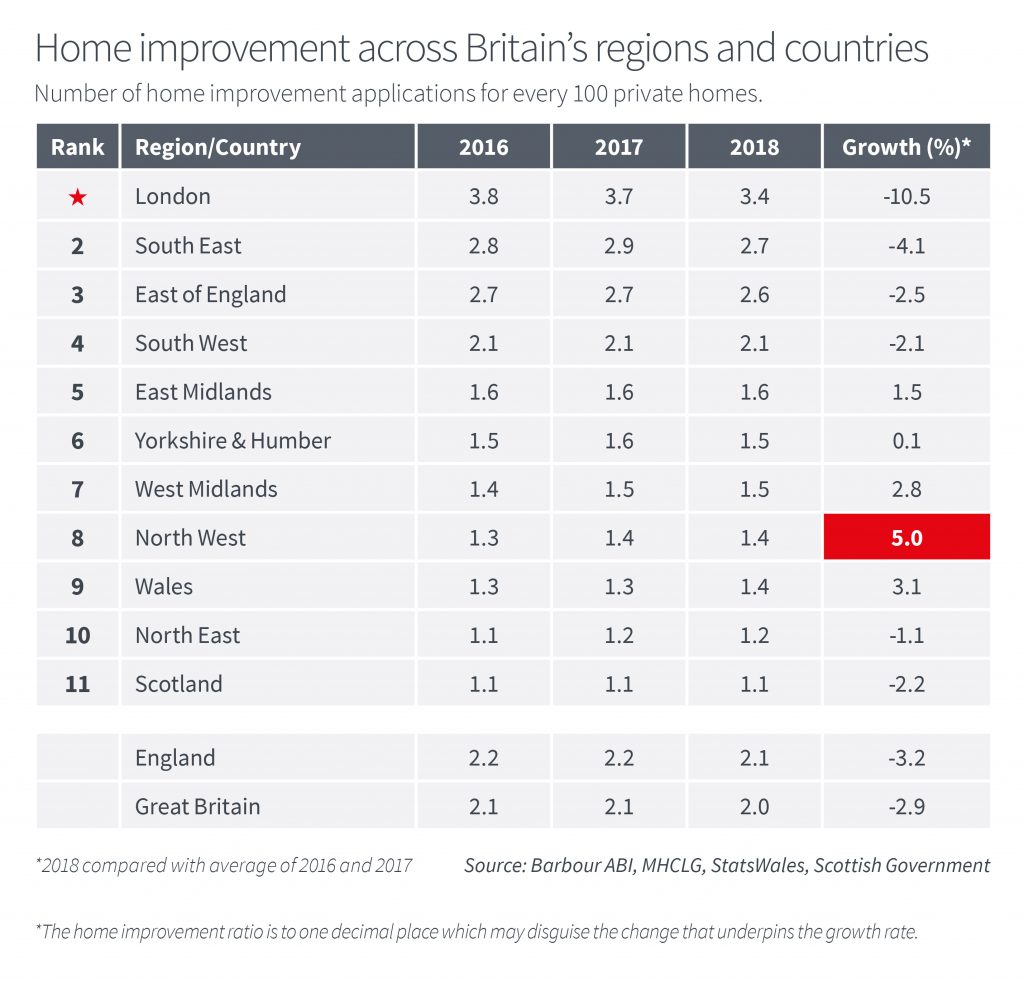 Home Improvement applications in the capital hit a peak in 2015 and 2016, with one application for home improvement made in each year for every 26 private homes. However, over the past two years London has seen the number of applications drop by almost 10%. The decline in home improvement in the capital was first evident with a fall in the super-affluent boroughs of Kensington & Chelsea and Westminster in 2015. But the pace of decline has accelerated, and the effect has widened to most boroughs.

Looking across the rest of Great Britain, the North West was highlighted last year as an area of growth and has been the stand out region over the past three years. The local authority of Manchester, for example, has seen a near doubling of applications being submitted over the past three years, albeit from a low base. The rise in homeimprovement applications in the North West fits with the vibrancy of the housing market and prices.

While the North West appears to have been the most buoyant, London, the East of England and the South East still account for 52% of all home improvement applications, slightly down from 54% in 2015 and 2016. The general picture we see in the changing regional pattern of home improvement planning applications is a continuation of the wave of house price rises that has crept out of London and the South East in recent years.

With a strong proven correlation between the economy and home improvement, the Home Improvers of Great Britain 2019 report surmises that the impact of Brexit and any shift in GDP is likely to reduce activity further. The uncertainty it has caused and will continue to cause, as the effects of any settlement begin to emerge, will likely inhibit households’ confidence.

Actis and STA respond to initial consultation on...

Plans submitted for over 100 new homes in...