Argent Related, with founding companies known for their experience in urban regeneration (King’s Cross and Hudson Yards), has launched its first ever development, a seven-building regeneration scheme at the heart of Tottenham Hale.
One of the largest developments in north London, it will reinvigorate Tottenham Hale, a place known for its transport connections and its hidden gems of creative businesses, giving it a welcoming, pedestrian-friendly heart for local residents, workers and visitors alike to enjoy. Five individual plots of land, currently a retail park and light industrial space, will deliver 1,030 new homes (a mix of market sale, affordable and rental); 15 new shops and restaurants; co-working and office space; a new health centre serving 30,000 local people; and two football pitches-worth of well-lit, elegantly-paved public space with 75 new trees.

Tom Goodall, CEO of the project, says, “Tottenham Hale is the perfect location for Argent Related’s first development: it’s an incredibly diverse, energetic, and welcoming area of London that deserves an animated and people-friendly urban landscape to match. For us, the challenge, and indeed the reward, will be in creating a new centre that feels inclusive and exciting as much as well-managed and long-lasting; ultimately a place that brings joy to residents and the surrounding community.”

The first new building launching in the area is 1 Ashley Road: 183 studios one-, two- and three-bedroom apartments architecturally designed by Alison Brooks Architects (RIBA Stirling Prize-winner) with interior design by Conran and Partners. The building, closest to the station and at the gateway to new residential street Ashley Road, has a warm brick façade, street-level colonnades around three new retail units, and two generous garden terraces created by Andy Sturgeon Design (a seventimes Chelsea Flower Show gold medal winner). Other resident amenities include an impressive triple-height lobby with 24-hour concierge, and a residents’ lounge.

Alison Brooks, Principal and Creative Director at Alison Brooks Architects, says, “Our approach has been to bring new expression to Tottenham Hale’s heritage with a sculpted, hexagonal building form with graphic orange brickwork that references the iconic Berol Eagle pencil, once manufactured on the same road. We’ve introduced a grand colonnade at street level, roof gardens that climb the building and crystalline facades to illuminate the inner courtyard. We hope 1 Ashley Road will act as a memorable flagship building for a great new neighbourhood.”
Simon Kincaid, Partner at Conran and Partners, says, “Our design approach is informed by a combination of form, pattern, detail and materiality which brings a sense of confidence and character to each apartment in the development. It is an approach which accentuates the brightness of the spaces using a contrast of warm textures and finishes. 1 Ashley Road is a key element in the regeneration of Tottenham Hale and we believe that, once delivered, it will make a significant contribution to the neighbourhood during the coming years.”
Tottenham Hale is seeing £1 billion of development investment, backed by Haringey Council and the Greater London Authority. Part of one of the largest Opportunity Areas in London, the area has received £30 million of investment into its transport interchange with a new station opening later in 2019 and with future plans for Crossrail 2. The new Tottenham Hotspur stadium has just opened nearby and provides a 60,000-seat sport and entertainment venue.
According to Knight Frank, house prices in Tottenham Hale have climbed 19% since 2016, outperforming the wider London market. Despite this growth, the average price of a home in Tottenham Hale is the least expensive of all locations along the Victoria Line. And, according to figures from Rightmove, a two-bed flat for rent in Tottenham Hale will, on average, be let more than two weeks’ sooner than the London average. 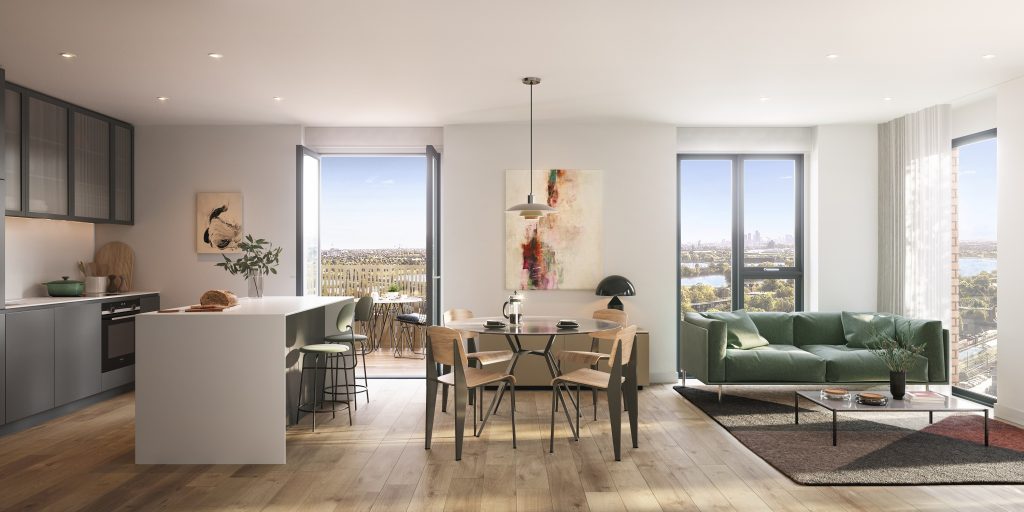 Raul Cimesa, Head of London New Homes at Knight Frank, commented, “1 Ashley Road, being designed and delivered by the team with experience at King’s Cross, will result in a best-in-class development. With the Lee Valley nature reserve and Wetlands on the doorstep, this corner of London is the next hotspot, with future infrastructure upgrades to the main station, more engaging customer-focused retail and commercial spaces, and quality new housing.”
The area is rich with green and blue spaces, such as the seven-hectare Down Lane Park, the River Lea and the Walthamstow Wetlands, a lush reservoir and nature reserve which opened to the wider public for the first time in 150 years in 2017.
0 comment
0
FacebookTwitterGoogle +Pinterest

Bumper delivery of affordable homes for

New homes set to be built at housebuilder’s...

RoyaleLife to provide home-from-home for NHS workers during...

New affordable homes created in the centre of...

Building more social homes is a no brainer